Engineered Arts is back with another video of its Ameca robot which recently got famous for exhibiting the most accurate human expressions of any robot. 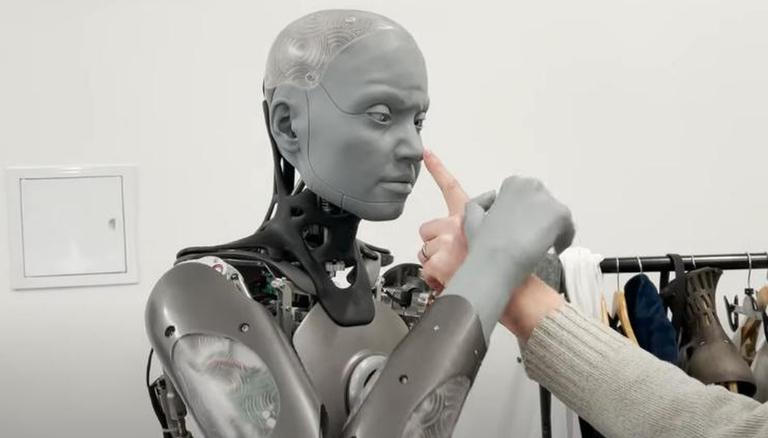 The UK’s Cornwall-based firm Engineered Arts is back with another video of its Ameca humanoid robot which recently got famous for exhibiting the most accurate human expressions of any robot ever. While the previous video showed the robot waking up from deep sleep into reality, this new video shows it wide awake and even apparently getting ‘offended’ on privacy invasion. If it sounds bizarre, take a look for yourself in the video below.

The above video shows how robot flinched when a person poked his finger and even went on to grab his hand. According to Engineered Arts, this was the first instance of a human interacting with the Ameca robot and as shown in the clip, the robot followed wherever the finger went, while also avoiding being poked in the beginning. As per the video’s description, the robot was reacting to anything that was breaching his ‘personal space’, which we all know is a very human thing. The video is a follow-up of a recent clip by the firm where the robot was exhibited the most accurate humans facial expressions.

In the video, you can see the robot coming to life and marvel over its creation with accurate human expressions. In fact, the robot even seems like a CGI at one point when it eerily smiles looking at the camera. Engineered Arts says that Ameca is the face of human-robotics technology and is the most advanced robot in human form. According to the firm, it is the perfect platform for human-robot interaction as it is designed as a platform to develop future robotics technologies. “ We focus on bringing you innovative technologies, which are reliable, modular, upgradeable and easy to develop upon,” states the company.

There is much to be amazed about Ameca apart from its ability to showcase facial expressions. Interestingly, the robot can be easily upgraded as both its hardware and software are modular. According to the company, each module can function independently, meaning you don’t need a fully assembled robot and can only use its head or even a single arm. Currently, the robot is unable to walk as a fully functioning robot is yet to be designed, however, the company assured that the research is underway to make a walking robot.