Welcome to the colorful world of Decorum. Step into a game where you and housemates will design each room from top to bottom in order to satisfy your Decor preferences. Decorum, a game of passive aggressive cohabitation, is designed by Charlie Mackin, Harry Mackin, Drew Tenenbaum and illustrated by Komboh Creative/Michael Mateyko. Published by Floodgate Games, Decorum boasts a playtime of 30-45 minutes and is initially designed for two players, with an option for a three to four player variant.

In Decorum players take on the roles of individual housemates vying for their preferences(conditions) to be satisfied. Decorum is a co-op game with a bit of social deduction that represents the decorating theme well, and plays quickly In what should be a simple game, Decorum can become frustrating if players do not find a way to communicate to achieve their conditions. Included in the game box are all the different pieces of furniture/art that can be placed throughout the house, painting tokens to paint all of the different rooms different colors, and the scenario envelopes to play through multiple games of Decorum, both for two players, and three to four players. 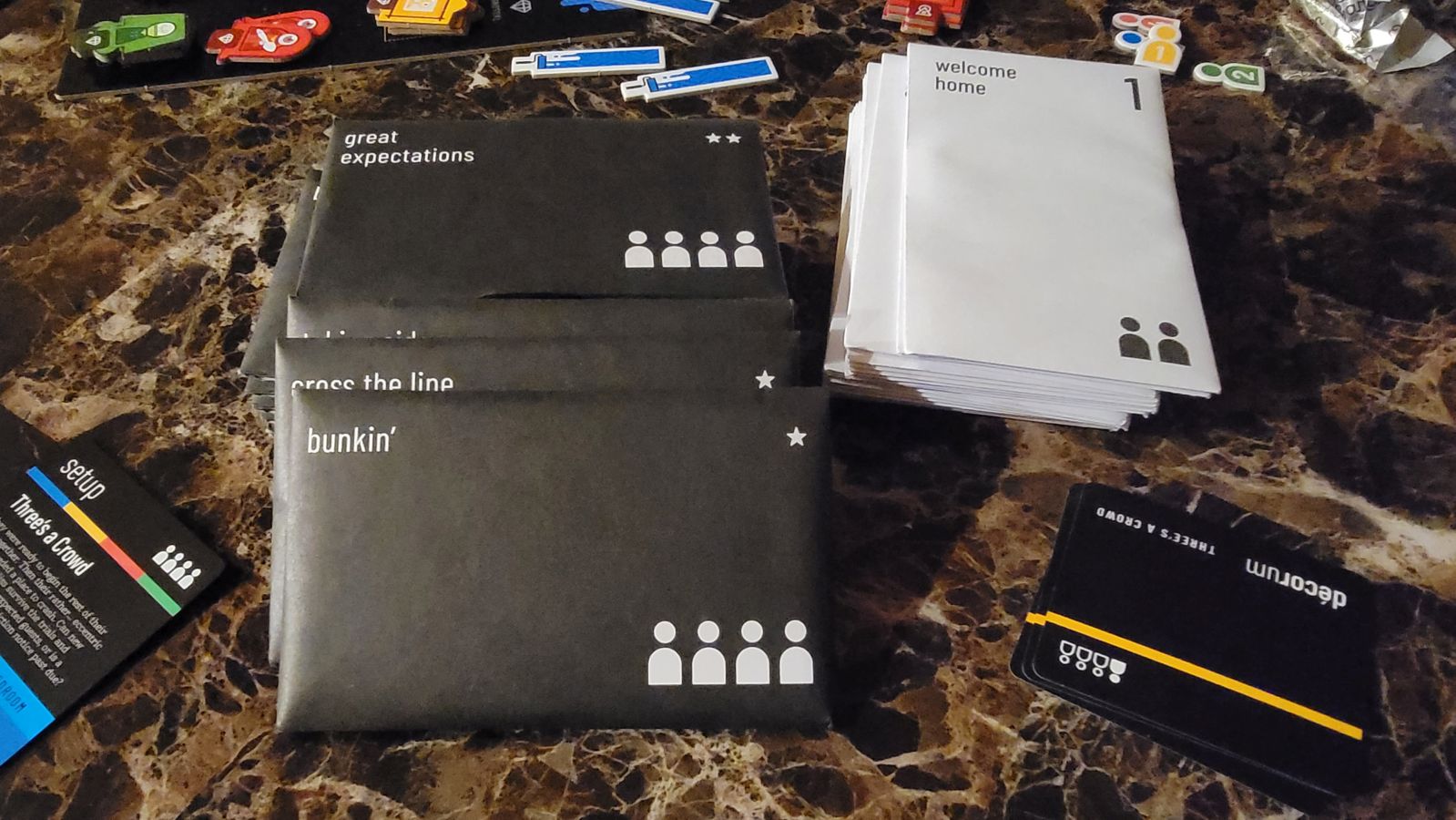 A scenario envelope contains conditions/role cards for each player, and the setup card for the scenario which includes the setup of the house with preloaded pieces of furniture/art and painted colors of rooms. These cards also provide names for the characters, some flavor text about these characters, and a few conditions about decorating the house. Conditions for characters might include things such as, “there must not be any green objects in the basement of the house”, or a player might have a condition that says they want two green items placed in the upstairs. In my experience conditions in a scenario have a complimentary condition that if one person achieves one, the other player can achieve one in a similar fashion that does not mess with the first player’s condition. In this instance neither player knows that both players need green objects in certain areas of the house. At this point in a game both players must start playing the deduction part of Decorum. Observations must be made by both players, such as oh he keeps removing green objects from downstairs.

In a typical game of Decorum there are 30 rounds, each consisting of both/all players performing one action and checking if their conditions have been fulfilled. There are five different actions that players can take. For an action players may add an object to an empty slot in the house, they can remove an object from the house, a player can swap an object of the same type for another color of the same object, players can paint a room a whole different color, and lastly players may pass if they desire. There are three types of objects and four different colors. While color may not be equally represented across all of the object types, all objects do have four different colors to them. The different combinations of color and object type are further separated by styles of objects. The objects are separated into lamps, curios and wall hangings, while the styles are separated into modern, antique, retro, and unusual. These are important because conditions might request certain objects of certain styles and or just a number of colors or number of styles. 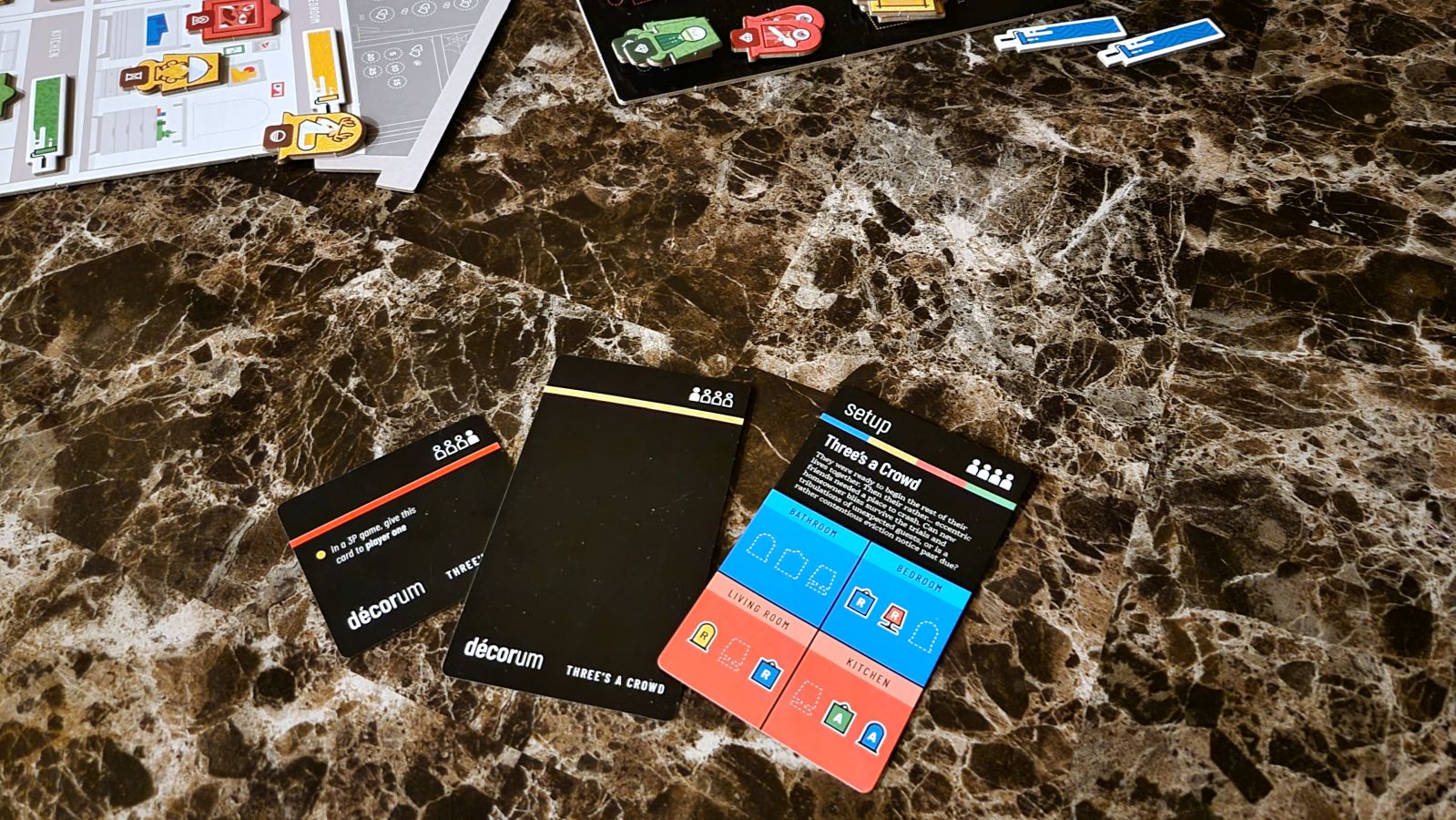 After taking an action players check against their character/scenario card to see if they have satisfied all of their conditions for the scenario, if so they announce it and if not they move to the next part of their turn. The final part of the turn is where a bit more of the deduction comes in, but with a helping of passive aggressiveness to assist. It is at this point in time that players will be able to communicate with each other about how best to fulfill conditions. After a player, for example, removes an object from the house, the opposing player now gets to comment on it something such as, “I love that!”, or “that piece in that room clashes so much.”

Once that player’s turn is complete, the next player takes a turn and this continues until all players from the start player have taken one turn. This now concludes a round, and in total there are 30 rounds in the game. Why this is important is when you get to rounds 15, 20, and 25, for two players, players have what is known as a heart to heart. In a heart to heart, players are allowed to reveal a condition of theirs one at a time in order to work towards completing their conditions. This can be especially important if players keep clashing about objects or colors or styles in the house. When the heart to heart is concluded play continues till the next heart to heart, up till the end of the game. If players seem to be struggling a little bit before getting to round 15, players have the optional choice of skipping to the heart to heart, but only for the first heart to heart. In a three to four player game this is called a house meeting instead of a heart to heart. Depending on how many heart to heart/house meetings you have during the scenario, players are rewarded with more points the less meetings they use. 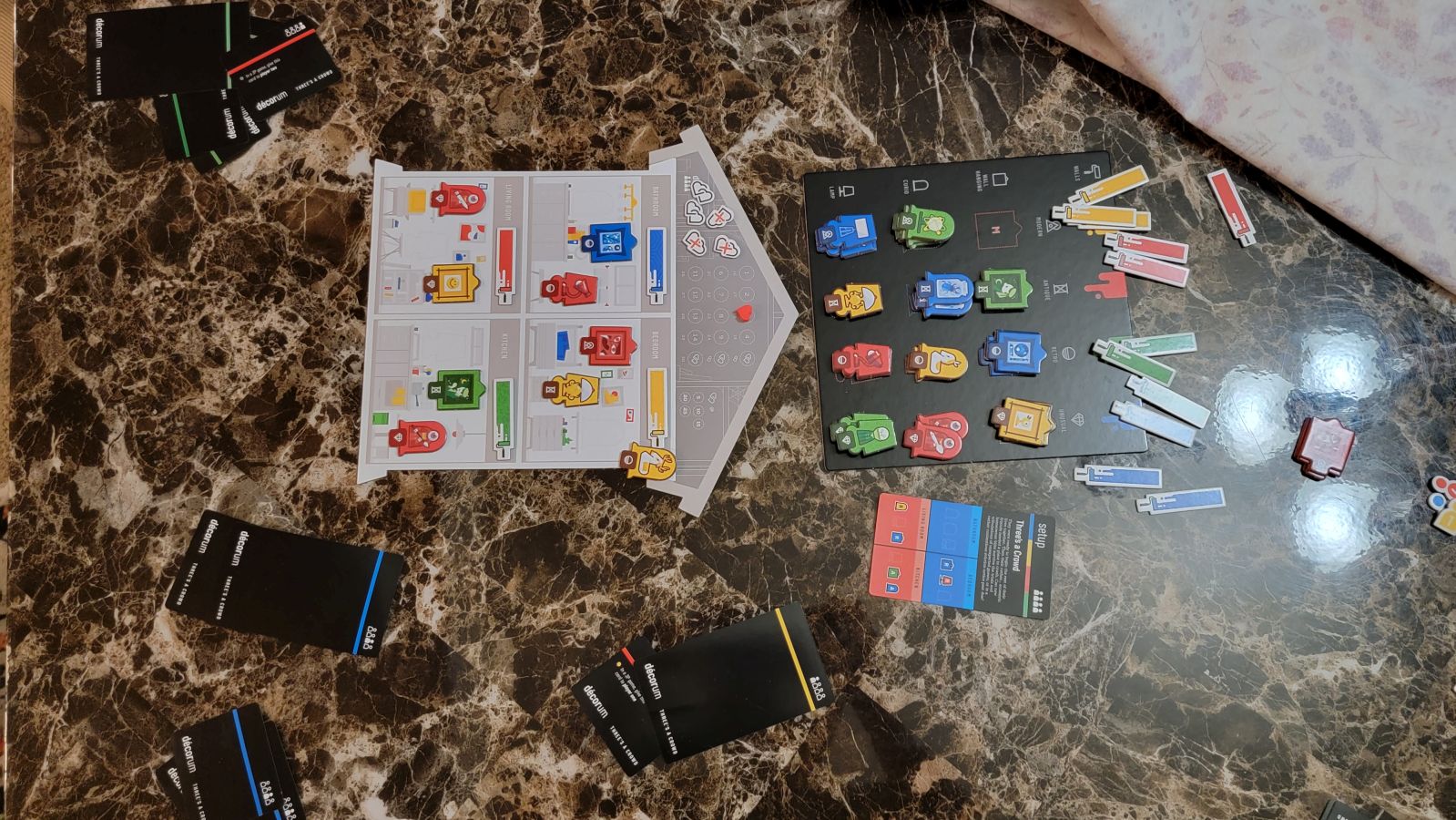 Decorating a house, passive aggressiveness, an idealistic co-op experience, all of these are what caught my attention when Decorum first came to me. These things still stand out to me but in different ways than I expected. First and foremost Decorum presented itself as more of a puzzle than a game. An intriguing puzzle, but a lesser game. The co-op experience was probably the more enjoyable aspect as the issue I have with many co-op games is one person tends to take over and tell everyone how to play so the group can win. Here Decorum does not allow for that as communication whilst being a supposed highlight of the game, also becomes the most restrictive part of the game. On the one hand being able to say I do not like that, after a player takes an action is nice and drives the game forward, on the other hand it winds up being a bit too restrictive and becomes the frustration point when one player does not understand the other.

This frustration for me only compounded playing in higher player count games. What begins as an exciting experience ends in disappointment when no one knows what’s going on as far as conditions, and if players will not venture past their conditions to meeting conditions for everyone, themselves included, then the game flounders and gains little traction. Instead of being the fun co-op experience of passive aggressive behavior, it winds up as just a co-op experience that never finds its footing and leaves the player wanting more. Despite these issues with Decorum, I still found that it was a moderately enjoyable experience. The part of me that enjoys puzzles, whether they are traditional puzzles, or puzzles in games, ultimately enjoyed the puzzle element of this game. At the end of the day, although beautifully designed I found myself wanting and even expecting more.