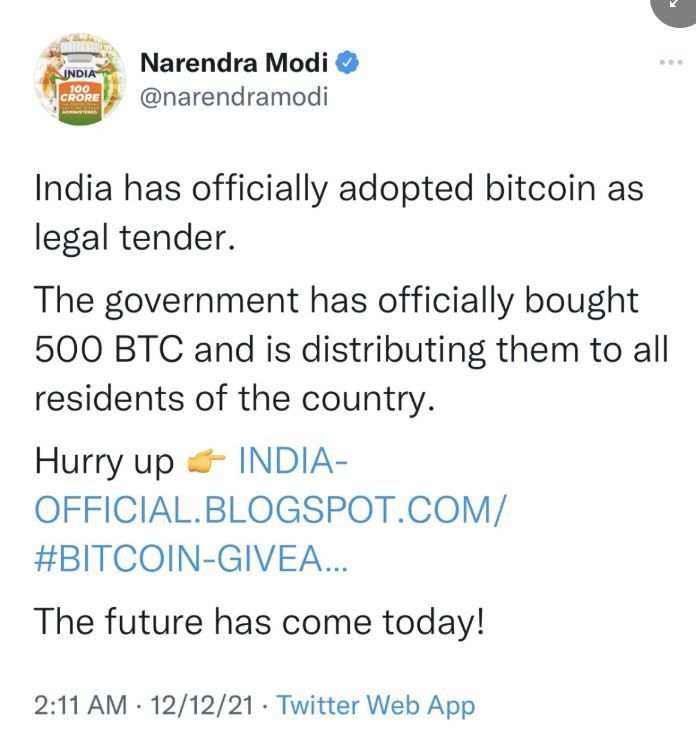 The claim made via the Prime Minister’s personal Twitter handle is emblematic of exactly what many feel renders cryptocurrencies as they currently are as untrustworthy – false and overblown promises and a succeptibility to volatility that is undesirable in currencies. The debate around cryptocurrencies in India has recently gained momentum. The Centre had stated that it has taken no decision on placing a ban on cryptocurrency advertisements but still it expressed that the digital token market is a ‘risky area’. This was mentioned in the Rajya Sabha by Union Finance Minister Nirmala Sitharaman. The government has also claimed that several cryptocurrency-related frauds are under investigation.

“This is a risky area & not in a complete regulatory framework. No decision was taken on banning its advertisements. Steps are taken to create awareness through RBI & SEBI,” Sitharaman had said

Sitharaman added that the guidelines of the Advertising Standards Council of India are being studied and their regulations are also being looked into in the context of the advertisements being run by cryptocurrency exchanges. She said that the regulations are being looked at “so that we can take, if necessary, some kind of position or a decision to see how we can handle it”.

Finance Minister further added that the Centre will introduce the The Cryptocurrency and Regulation of Official Digital Currency Bill, 2021 in the ongoing Winter Session of the Parliament. The bill aims to bring in regulations on cryptocurrency transactions in India. The Bill on cryptocurrency has been included in the Lok Sabha Bulletin-Part II, as a part of the government’s plan to bring it up during the ongoing winter session. It will create a facilitative framework for the creation of the official digital currency to be issued by the Reserve Bank of India (RBI). Moreover the Finance Minister informed that the RBI is also coming up with a phased implementation strategy for the introduction of Central Bank Digital Currency (CBDC).

“Introduction of CBDC has the potential to provide significant benefits, such as reduced dependency on cash, higher seigniorage due to lower transaction costs, reduced settlement risk. Introduction of CBDC would also possibly lead to a more robust, efficient, trusted, regulated and legal tender-based payments option. There are also associated risks which need to be carefully evaluated against the potential benefits,” said Sitharaman. At the same time, the Centre clarified that CBDC will not have volatility associated with private cryptocurrencies as it will be backed by the RBI.

Prime Minister Narendra Modi too had chaired a meeting and spoke about the issue of misleading non-transparent advertising related to cryptocurrency. The meeting was conducted after a consultative process done by the Reserve Bank of India (RBI), the Finance Ministry and the Ministry of Home Affairs. While asserting that crypto markets cannot be allowed to become avenues for money laundering and terror financing, sources indicated that the Centre will continue to engage with all stakeholders.

“It (global collaboration between countries) should also recognise national rights and at the same time, promote trade, investment and larger public good. Take cryptocurrency or bitcoins for example. It is important that all democratic nations work together on this and ensure that this does not end up in wrong hands, which can spoil our youth.”

On Friday, Prime Minister Narendra Modi stressed on jointly shaping global norms for emerging technologies like social media and crypto-currencies so that these are used to empower democracy, not to undermine it. He was addressing the  ‘Summit for Democracy’ hosted by US President Joe Biden virtually. He remarked that the meeting provides a timely platform for furthering cooperation among democracies.

“There is much we can learn from each other. We all need to constantly improve our democratic practices and systems. And, we all need to continuously enhance inclusion, transparency, human dignity, responsive grievance redressal and decentralization of power,” he said

“In this context, today’s assembly provides a timely platform for furthering cooperation among democracies. India would be happy to share its expertise in holding free and fair elections, and in enhancing transparency in all areas of governance through innovative digital solutions. We must also jointly shape global norms for emerging technologies like social media and crypto-currencies, so that they are used to empower democracy, not to undermine it,” he added

With inputs from agencies