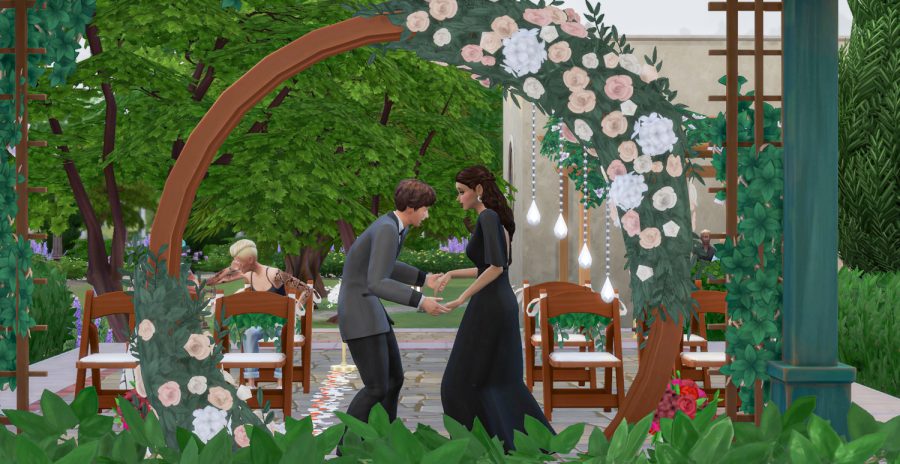 Since its announcement, the latest game pack for The Sims 4, “My Wedding Stories,” has been marred by controversy.

The primary advert for the popular life simulator game featured a same-sex Sim couple, leading the Sims team to initially ban the game pack in Russia, where the LGBTQ+ community faces criminalization.

While it was admirable for the Sims team to stand by their values and oppose homophobia, the decision to restrict Russian players from the pack was met with contention. LGBTQ+ players in Russia were especially hurt.

It is difficult enough to be treated like a criminal by your own government because of who you love. Being blocked from playing a game you love for the same reason only compounded that pain, and players felt as though Electronic Arts, the publisher of the Sims 4, did not consider them at all in their decision.

Russian Sims 4 player SimplyHao on Twitter wrote in a statement that they felt the Sims team was prioritizing a fictional story made for marketing purposes over real, vulnerable people living under oppressive regimes.

“From our perspective the whole move is about looking good in the eyes of the western simmers,” they wrote. “Who cares about Russia, right, it is a small and poor market.”

But the problems did not end there.

As soon as it was released, players who purchased the pack took to social media to air their frustration at the completely broken and unstable game pack.

“My Wedding Stories” is supposed to create a fuller wedding experience for players. It allows the player to host pre-wedding events like bachelor parties and rehearsal dinners, create wedding parties with Sims of Honor and officiants, and overall, host more enjoyable and cohesive weddings than the base game allows.

The Sims 4 base game weddings lack a lot of depth, so this new level of gameplay would be fantastic – if it worked.

Planning the wedding events is alright – the new planning menu allows for far more customization, which was excellent. It is when the event begins that the problems start.

The game pack’s new planning menu includes a feature that allows players to assign a dress code for their wedding guests. However, once my wedding event began, none of my Sims’ guests showed up in the assigned dress code.

The simulated guests were also extremely rude throughout the wedding, walking around and chatting instead of sitting to watch the ceremony (this has been an ongoing issue in Sims 4 weddings and was something that this game pack was explicitly supposed to fix).

The Sims I assigned to my wedding party were so busy chatting that they did not do the actions I assigned them, and I was only able to gain enough control to have my engaged Sims perform their vows. No walking down the aisle, no officiant, no ring bearer or flower pal. Nothing.

The other wedding features did not work, either. No matter what I did, my Sim couple refused to cut their wedding cake, perform their first dance or even do a spousal kiss together.

The only action I could get the guests to perform was to throw rice, which is so minuscule and pointless in the grand scheme of a wedding.

The one thing I can say is that the new outfits available for Sims are admittedly stunning. The new world introduced, Tartosa, is inspired by the Mediterranean coast and is also quite lovely.

The Sims team also made a good effort to include non-western wedding traditions, such as a hanbok for female Sims to wear and a tea ceremony as a wedding activity option.

However, I can confidently say that the pack overall was a severe disappointment.

The release was already sullied by the team’s lack of consideration for LGBTQ+ players in countries that do not allow LGBTQ+ content. I desperately wanted to see a redemption arc for this pack, but it just was not in the cards.

“My Wedding Stories” is severely broken. Simply put, it should not have been released in this state.

When every single main feature in a game does not work, it becomes quite clear that quality assurance is an extremely low priority for the Sims 4 team.

Some might argue that this disappointing pack is representative of an overall decline in the quality of the gaming industry. It often seems that as graphics improve, developers sacrifice gameplay and hope that the nice looks of the game will be enough to make it successful.

This definitely seemed to be the case for “My Wedding Stories.”

Pretty clothes, a nice new world and some social justice virtue-signaling do not make a good game. If the Sims 4 wants to stay relevant and keep its reputation as the leading life simulation game, the team needs to start prioritizing gameplay and quality assurance to make add-ons that are not just fun to play, but actually functional.