As Sri Lankans continue to call for the resignation of President Gotabaya Rajapaksa, a local artist has uniquely joined the demonstration. 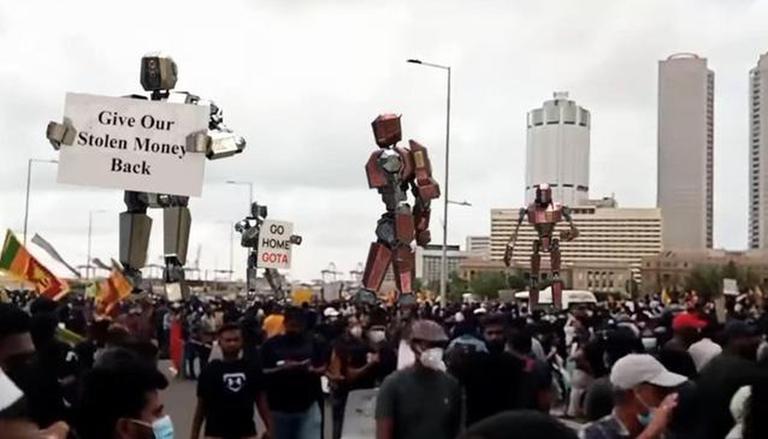 As Sri Lankans continue to call for the resignation of President Gotabaya Rajapaksa amidst the harrowing economic crisis, a local artist has joined the demonstration in a unique manner. The artist has utilised his skills in Computer-Generated Imagery (CGI) to create gigantic fantasy creatures. In a video that the artist shared on Facebook, gigantic robots and others could be seen marching alongside protesters in Sri Lanka.

The artist named Damith Galena shared the clip on his Facebook handle. The 13-second clip features multiple colossal robots protesting against the Rajapaksa administration. One of the fantasy creatures could be seen with a gigantic placard that reads “Go home GOTA.” Notably, the government had imposed a nationwide internet blackout earlier this month to restrict people from sharing anti-administration posts on social media accounts.

“The young people who voted en masse for President Rajapaksa, want him to go. On the other hand, President has said that he has to stay on. So, it has become a deadlock,” Wickremesinghe said.

He further lambasted the Rajapaksa administration for not making timely interventions. “In the last two weeks, the government decided to go to the IMF but it’s going to take a long time. Before that, we may run out of resources. I don’t think that Government has that many resources left in the reserves and now they’re borrowing money from leading export companies to pay the bill,” Wickremesinghe told ANI. Raising his concern about fuel requirement, he said, “India’s credit line for fuel will run out latest by the 2nd week of May, and then we’re going to be in serious trouble.”