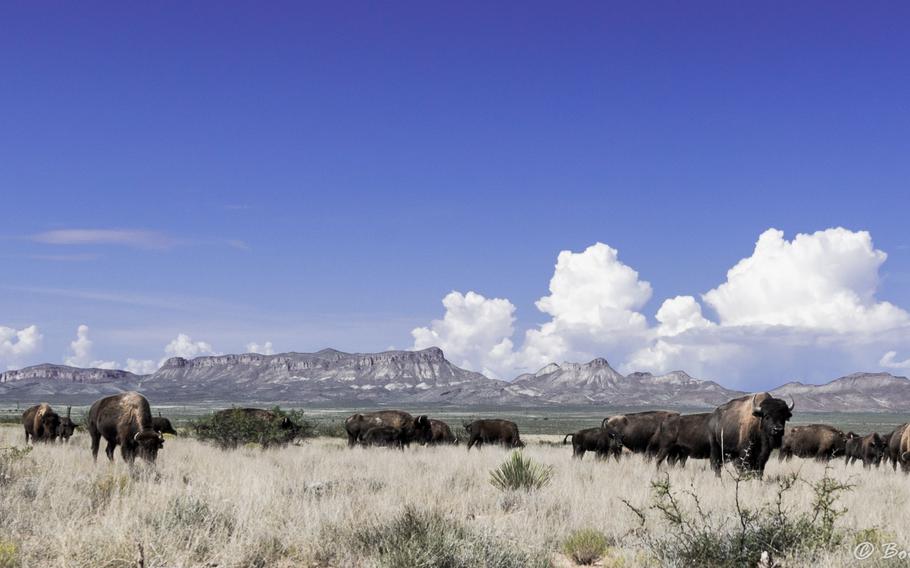 About 315,000 acres of southern New Mexico land owned by billionaire media tycoon Ted Turner were protected from development in a partnership between the U.S. Department of Defense and New Mexico Land Conservancy, the Carlsbad Current-Argus reported. (U.S. Army)

CARLSBAD, N.M. — Habitat for about a million bats will be protected from human impacts through a deal between a nonprofit and the federal government.

About 315,000 acres of southern New Mexico land owned by billionaire media tycoon Ted Turner were protected from development in a partnership between the U.S. Department of Defense and New Mexico Land Conservancy, the Carlsbad Current-Argus reported.

The deal saw a conservation easement added to Armendaris Ranch, owned by Turner, due to perceived cultural significance and biological diversity on the land in Sierra and Socorro counties.

The ranch land supports more than 500 vertebrate species, per a report from the Land Conservancy, including multiple listed for federal and state protections.

It also contains the Fra Cristobal Mountain Range, home to 230 desert bighorn sheep, and lava fields that include the Jornada cave system that houses bats of multiple species.

“This land is laden with important and unique natural and cultural resources, and the opportunity to permanently protect a property with conservation values of this magnitude was at the heart of our organization’s decision to tackle this landscape-scale project,” said Ron Troy, southern New Mexico program manager with the Land Conservancy.

What is the location and history of Armendaris Ranch?

Armendaris Ranch sits along the Rio Grande, from the Bosque Del Apache National Wildlife Refuge to the north and stretches about 50 miles south to Elephant Butte Lake near Truth or Consequences.

It spans east from there through the Fra Cristobal Mountains to the San Andres Mountains and White Sands Missile Range.

Ancient footprints were discovered in the ranch about 40 miles from White Sands, believed to date back 20,000 years.

In modern history, the land contains a section of El Camino Real, a network of roads built by colonial Spain also known as the King’s Highway, and the site of largest Civil War battle fought in the Southwest known as Valverde.

There are 20 abandoned town sites on the land, per the Conservancy, and former transportation routes between Los Alamos and the Trinity Site used during the Manhattan Project that saw the first nuclear weapons tested in New Mexico.

The easement was intended to protect all of the historic and cultural significance of the land by restricting most development activities.

For the DOD, blocking development on the ranch was useful as it contains a part of the western buffer for White Sands Missile Range.

Setting aside the land was partially funded by the department’s Readiness and Environmental Protection Integration (REPI) program, which was created to mitigate land conflicts near military installations and conserve wildlife to avoid restrictions that could inhibit missions.

The REPI program conserved 830,000 acres since its inception in 2002, and the Armendaris Ranch easement was the largest in the program’s history, almost doubling the conserved land from 340,000 acres on 115 easements to 655,000 acres .

“The permanent protection of this land presented a unique and timely convergence of interests between the various partners involved,” said Scott Wilber, Conservancy executive director. “This is truly a win-win-win project for wildlife, the people of New Mexico and our national security.”

Brian Knight, team manager with the U.S. Army, said for White Sands Missile Range (WSMR) the project would allow the facility to expand its airspace, as part of the easement is in a region known as the Western Call Up Area where officials at the missile range can extend its airspace as needed for testing and other activities.

“Completion of this historic project has been a very high priority for White Sands Missile Range,” Knight said. “Working with our neighbors to create compatible land uses and minimize any encroachment to military airspace will sustain the unique capabilities that make WSMR the premier test and evaluation range in the country.”

Land conservation was also a main priority for the state of New Mexico and federal government in recent months.

President Joe Biden and the U.S. Department of the Interior pushed in recent months a “30×30” plan that would see 30% of federal public land conserved by 2030, also known as the “America the Beautiful Initiative.”

In Biden’s budget request for Fiscal Year 2023, he called for an $18 billion budget at Interior, an increase of $2.9 billion.

About $4.9 billion of that request would go to the 30×30 initiative, per an Interior report, to support local conservation projects.

“President Biden has proposed an important blueprint for our country’s future that reflects the importance of science, equity and collaboration in carrying out Interior’s important missions,” said Interior Secretary Deb Haaland.

“Today we promote a broad view of conservation that reflects the importance of traditional resource protection, access for outdoor recreation, contributions of working lands, and tribal sovereignty and self-determination,” Lujan Grisham said upon announcing the order. “We have set the wheels in motion to conserve our state’s incredible natural resources and ensure that New Mexico remains, forever, the Land of Enchantment.”