This article appeared in the January 7 issue of the Progress Times.

Municipalities Valley-wide called in to put out the flames

PHARR, TX–Isaac Smith was out of town when his family-owned business, Matt’s Cash & Carry Building Materials, went up in flames on New Year’s Day.

“As soon as I heard what was going on, I rushed back home,” said Smith.

Smith’s older brother, Jeremy, discovered the fire, as his home resides in the neighborhood on Polk St. behind the business. Pharr Fire Rescue received a call at around 11:30 a.m. on Saturday for visible smoke in the area.

“I saw picture after picture come in, call after call, text messages,” Smith said, stating he was overwhelmed with shock as he drove back down to the Valley. 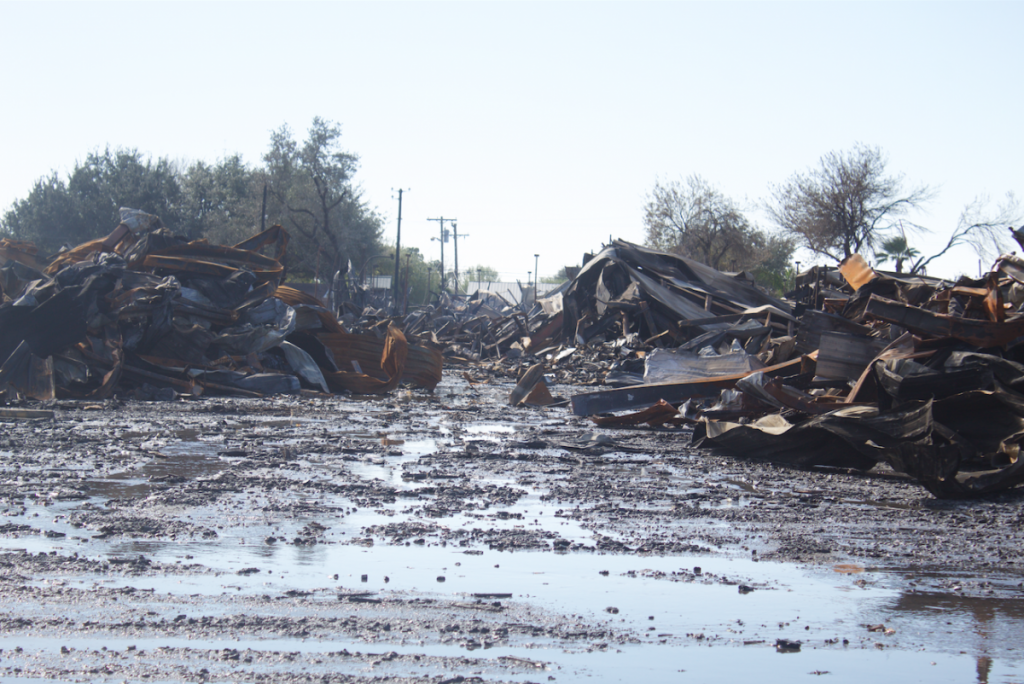 Burnt twisted metal and wood remains of what would be the front and interior of the shop after the damage caused by the 16-hour fire. Fire Investigator Mike Navarro said the fire was not put out until 4 a.m. the next day.Progress Times photo by Maria Ruiz.

As Smith drove down to grieve with his family, Pharr Fire Rescue called on seven municipalities to help. Mission, McAllen, Edinburg, Weslaco, San Juan, Sullivan, Palmview, and Alamo Fire Departments worked together to tame the fire.

The smoke was so extensive and immense that Interstate 69C exit 1B, Eastbound to Harlingen, was closed off for drivers’ safety. Below, a cloud of smoke shadowed over EI-2 and W I-2 Frontage Rd.

Locals, family, and friends from across Hidalgo and Cameron county have reached out to Smith and the other owners to help with finances.

“It’s really touching. It hits me right between the eyes,” said Smith. “People have called, messaged, saying they’re willing to give up everything that they have for our business…It just shows we’re doing something right here in the community.”

Pharr Fire Investigator Mike Navarro said that the cause of the fire has not yet been determined and may not be until a few months from now.

“It’s in the preliminary stages of the investigation. We’re going to be ongoing through this week and the next,” said Navarro. “We didn’t finish extinguishing the fire until about 4 a.m. this [Sunday] morning.” 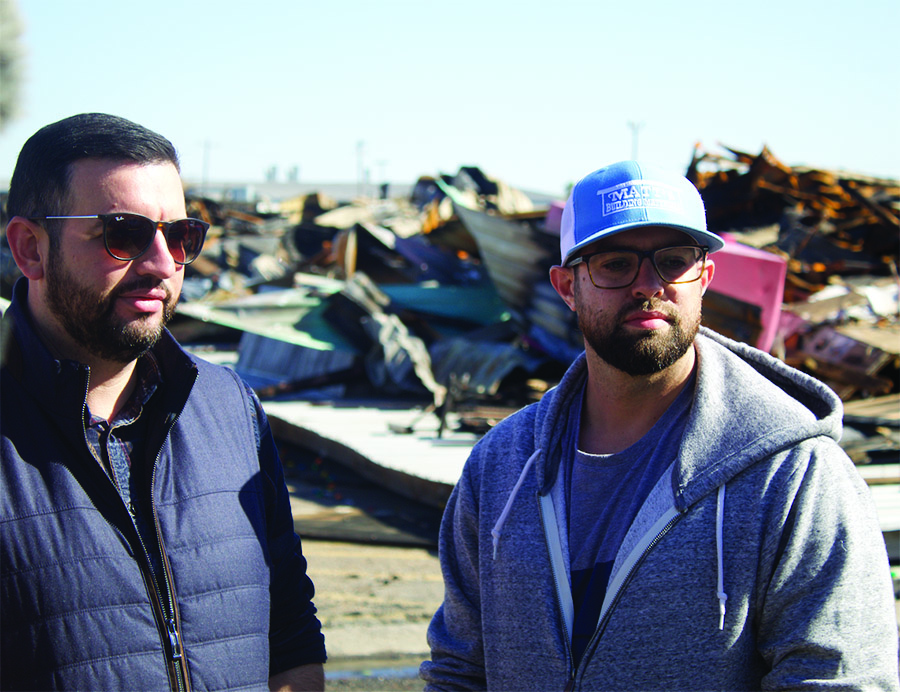 Owners Isaac and Jeremy Smith speak to press. The remains of the original Matt’s Cash & Carry Building Materials are visible behind them. Progress Times photo by Maria Ruiz

Although the investigation for the cause of the fire may take weeks or even months, Smith believes it could’ve been one of two things: fireworks from New Years’ festivities or an electrical shortage from the back of the building by the door shop.

Matt’s Cash & Carry Building Materials, built in 1971, lacked a sprinkler system installed in the structure. However, according to Smith, smoke detectors and fire alarms were installed.

“There was no way to extinguish the fire without people being present,” said Smith. “We had fire extinguishers. If somebody was there, they could’ve extinguished the fire. But no one was working [that day].”

Smith said that the two remaining locations of Matt’s Cash & Carry Building Materials, in both San Benito and Palmview, will continue business as usual, with employees from the lead location undergoing transfers. However, since the Pharr location burned down, those locations may experience shortages in stock.

“We have a lot of inventory allocated here that would feed into the other locations. So we’re going to be short a little bit.”

A good portion of the building material area remained unharmed. Lumber and plywood products are still intact, to which Smith said they would continue to make deliveries on lumber, roofing, and siding.

“That’s all we’re going to be able to do for the time being, at least at this location.”

Smith said the Matt’s Cash n Carry family and the team continue to ‘grieve, but quickly’ as there is lots of work to be done to revive the Pharr business.