Welcome to The TechCrunch Exchange, a weekly startups-and-markets newsletter. It’s inspired by the daily TechCrunch+ column where it gets its name. Want it in your inbox every Saturday? Sign up here.

What a week, y’all. What a week. Somehow the news is still at it, even if we’re an inch away from the back half of December. So much for a holiday slowdown! Up first, some notes on the week’s key news, then we’re talking vector search and some final book recs. Into the breach!

How to get coverage for your company. And, vector search.

One of the best bits of being a reporter in the technology space is spending time with smart people who can explain the future to you. Not in the soon we’ll be in the metaverse sense, but in the here’s a tech that is going to change the way we handle information in the future sense.

Enter Bob van Luijt, CEO and co-founder of Semi Technologies. The startup is building Weaviate. Like with a great many startups today, Semi is a for-profit OSS company. More simply, it is building a business atop an open source project, namely Weaviate.

Bob was kind enough to not only spend a few hours talking me through his company, the market for searching unstructured data and how Weaviate works but also to scrape TechCrunch’s 2021 output and put it into a little GUI so that I could play around with it.

This is a great way to get reporters to care about your company, by the way. Not the scraping work; that was an extra kindness — but to spend a lot of time answering somewhat silly questions with patience, even when the reporter in question has to retread lots of ground.

Anyway, vector search. What Weaviate allows for is the searching of unstructured data, quickly. Microsoft says that vector search “uses deep learning models to encode data sets into meaningful vector representations, where distance between vectors represent the similarities between items.”

Bob made this a bit simpler with an example. In a traditional database, you might have data indicating that the Statue of Liberty is in New York City and that the Eiffel Tower is in Paris. But to snag those data points, you’d have to search for something precise. With vector search — via Weaviate or a related software product — you can ask the data to show you what the database has about landmarks in France. And get the Eiffel Tower data to arise.

Neat, right? Very. Tinkering with the TechCrunch portal that Bob and his team were kind enough to set up, I was most taken with a question that they suggested: “Who writes the TechCrunch newsletter when Alex Wilhelm is out?” Frankly, this is a fun query due to its imprecision. Which TechCrunch newsletter? And what does out mean? Well, the search results managed to find a bit of text from this very column noting that I was taking a day off and that Anna would be handling the newsletter herself.

Very cool. Semi Technologies is a pretty young company, but one that I am keeping tabs on. For a few reasons, first of which being that open source startups are nearly always more interesting than their closed-code brethren. Mostly because founders building with OSS tech tend to have a slightly less hard-grind approach to business, and because I like Bob.

More to come once I can condense my nearly 3,000 words of spaghetti notes from calls with Semi into something a bit more coherent. 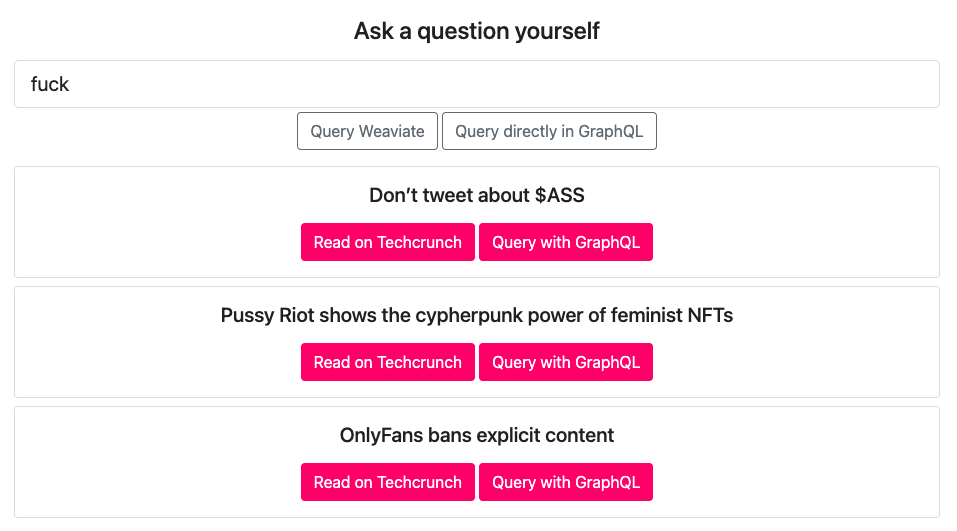 After spending quite a lot of time this week working on our two-part venture capital book recommendation list, we’re adding some of our own favorites to the mix. Of course, grains of salt as books are as personal as paintings, but we can’t help but share some of the best stuff that we read this year!

Born to be Mild: Adventures for the Anxious, by Rob Temple

According to my records, this was the first book I read in 2021, but 12 months on, it really stuck with me. You may know its author, Rob Temple, as the man behind the hilarious social media accounts and book series Very British Problems. But this book is different. It is an account of his struggle with anxiety and of his attempts to get out of his comfort zone. It is touching, highly relatable and often very funny — if you are a Sue Townsend fan like me, there’s a good chance you’ll love this, too.

How to Read Numbers: A Guide to Statistics in the News (and Knowing When to Trust Them), by David Chivers and Tom Chivers

This is the book I am reading right now, with the caveat that I am not nearly done yet — but this is very promising. It might add fuel to the media backlash, but it has a point: A lot of the numbers we read about in the news need to be taken carefully. Which makes it a great read for journalists and news readers alike. The more expert readers become at reading numbers, the more sophisticated we will be able to get in our analysis.

The best science fiction doesn’t simply slap spaceships atop the world we live in and call it a day. Indeed, the best science fiction remolds everything, from economics to humanity to science to physics itself. “The Salvation Sequence” is a series of books I read this year that did just that. From economics and dealing with aliens to what it means to truly be human and future politics, it’s all in there. And it’s a hell of a ride. I can’t wait for the next installment to come out so that I can read the whole damn series again.

A Memory Called Empire and A Desolation Called Peace, by Arkady Martine

There is more than one way to draw the future. Martine sketches a future where the concept of civilization and barbarism collide with art and empire. And memory. And hidden technologies and war. It’s more than I can truly describe for you in a short blurb, other than to say that what Martine has managed to build inside her sci-fi universe is nearly more art than science. And that’s high, high praise.

Fantasy novels are far too often rip-offs of European feudal history. Oh your duke is being an ass? Better get the serfs to rebel! That sort of thing. And then there’s Black Sun, which takes fantasy in an entirely different direction. Seemingly inspired by South and Central American traditions, it’s a gosh darn rollercoaster of good. A must read.

The Last Graduate, by Naomi Novik

Novik is a damn fine writer. “Uprooted” and “Spinning Silver” both kicked ass. But her masterwork, from my perspective, is “A Deadly Education.” It came out back in late 2020. And thus my countdown to its sequel, “The Last Graduate,” started. Rare is it that I count down the days until a book comes out, but here I had no choice. And “The Last Graduate” was superb. If you want to meet a protagonist unlike any you’ve ever read, and enter a world where everything has teeth, read these books. Read them. You will thank yourself.