‘Thinking of quitting my jobs & becoming an influencer full-time,’ Musk wrote to his 66 million followers on Twitter.

By Cecile Vannucci and Craig TrudellBloomberg

Elon Musk paired another disclosure that he’s disposed more Tesla Inc. stock with a joke tweet about quitting his jobs.

Tesla’s chief executive officer offloaded another $963 million worth of shares to pay taxes on the exercise of an additional 2.2 million options, according to regulatory filings dated Thursday. He’s now disposed of about $11.8 billion worth of stock over five weeks.

The world’s richest man then quipped a couple hours after the filings posted that he had found a new calling.

“Thinking of quitting my jobs & becoming an influencer full-time,” Musk wrote, asking his almost 66 million followers what they thought of the idea. He followed this up with several laughing-emoji replies.

thinking of quitting my jobs & becoming an influencer full-time wdyt

Shareholders and regulators haven’t always appreciated the humor in Musk’s Twitter high jinks. Tesla shares plunged after he posted in jest on April Fools’ Day in 2018 that the company had gone bankrupt. Later that year, the U.S. Securities and Exchange Commission sued him over tweets about taking Tesla private at a price significant in marijuana culture, which he thought would amuse his then-girlfriend.

Tesla fell 2.1% to $982.53 shortly after the start of regular trading Friday. The stock has dropped about 20% from a peak on Nov. 4 as Musk has offloaded shares. He tweeted last month he would abide by a poll he took on whether to sell 10% of his stake in the carmaker. He’s disposed of more than 11 million shares since then. 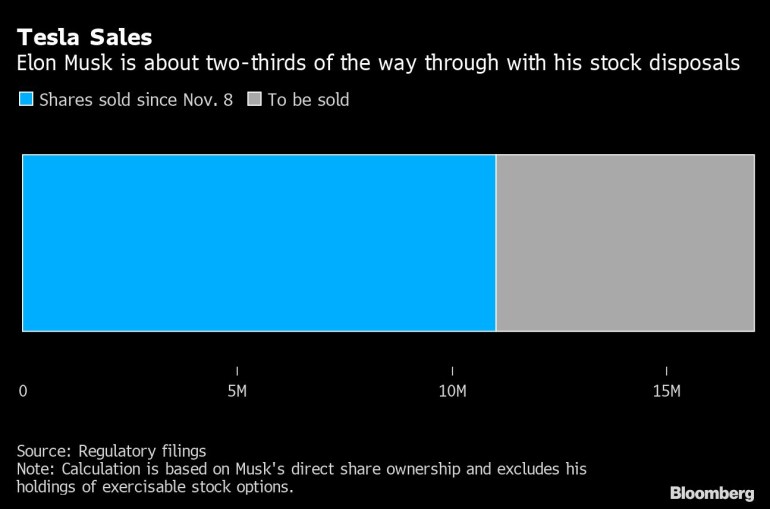 Musk is now about two-thirds of the way through with trimming 10% of his direct share ownership. If the threshold he’s referred to includes exercisable options, he’ll need to get rid of another roughly 6 million shares.

The CEO of Tesla and Space Exploration Technologies Corp. is the world’s richest person, with a $266 billion fortune that has grown by $110 billion this year, according to the Bloomberg Billionaires Index.